Working in Beijing: The good, the bad and the utterly random

This story is a continuation of Natalie’s experience in living abroad (part one can be read here).

Here, she shares some of the weird and wonderful sights and sounds witnessed in China. Read it to believe it. 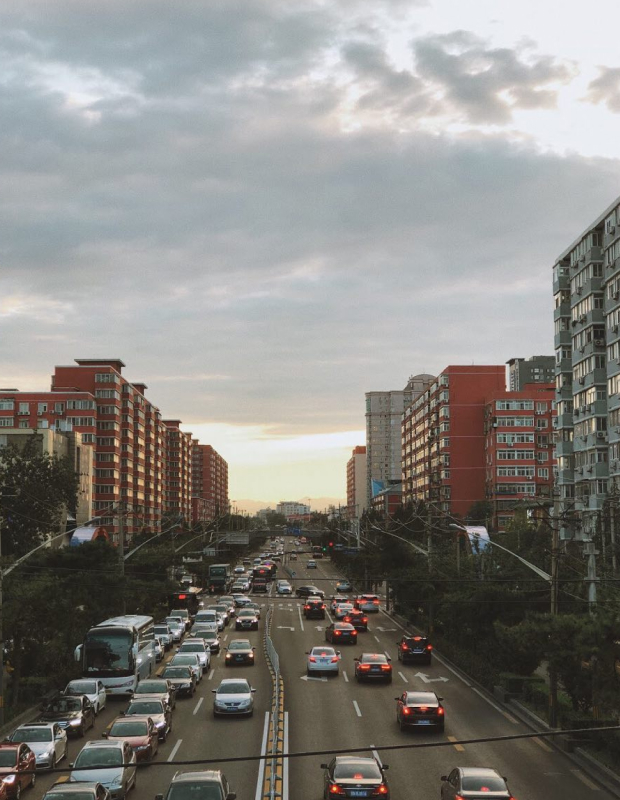 My friends know that I have one weakness: McDonald’s. I could eat their stuff for days on end and at a point in my life, I knew the prices of most of the Extra Value Meals and individual items (yes I need intervention, but how can you say no to a McNugget?). Anyway, if you think Singapore has got it down pat with their seasonal menu items (ew Salted Egg Yolk Loaded Fries anyone????), China’s McDonald’s blows everything out of the water.

It’s not the greatest in taste sometimes, but what kept me engaged was how they’d have new menu items every other month. Black Forest pie? I TRIED IT. A “French-style” burger with fried sauce and “French sauce” (I don’t know what that is honestly) on a baguette? I TRIED IT. Hashbrowns shaped like footballs during World Cup season? SIGN ME TF UP!!!!!! I was just unable to go cold turkey and just lay off fast food. 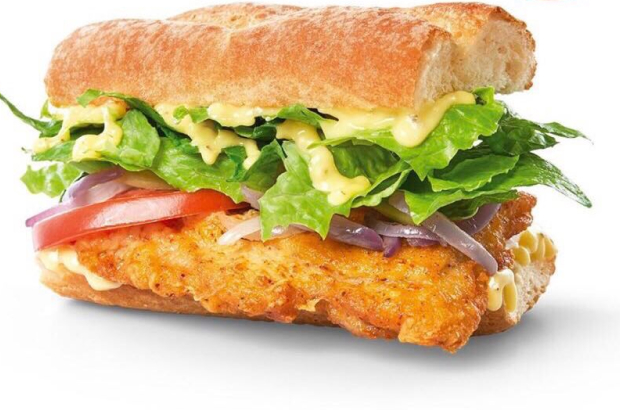 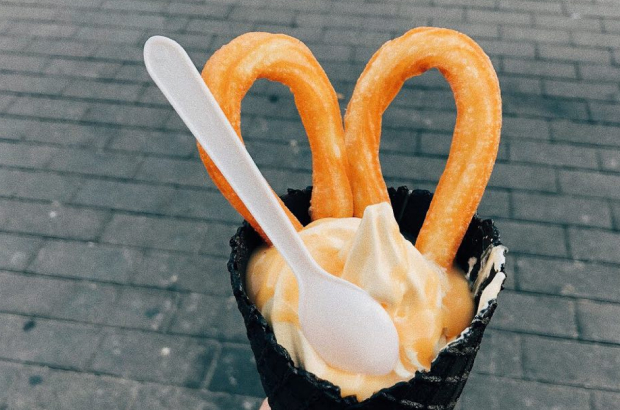 HOW TO RESIST YOU TELL ME. THOSE ARE FRESHLY FRIED CHURROS!

Every other month was a new pie, or ice cream, or burger, or there will some offer (like a one-for-one hashbrown HULLO? Who says no to extra hashbrowns?) that always crumbles my resolve to not to eat McDees.

Of course I didn’t subsist on McDonald’s alone. Food in China not as nightmarish as everyone describes it to be. And they have great chip flavours. What’s horrifying actually, are their menus: 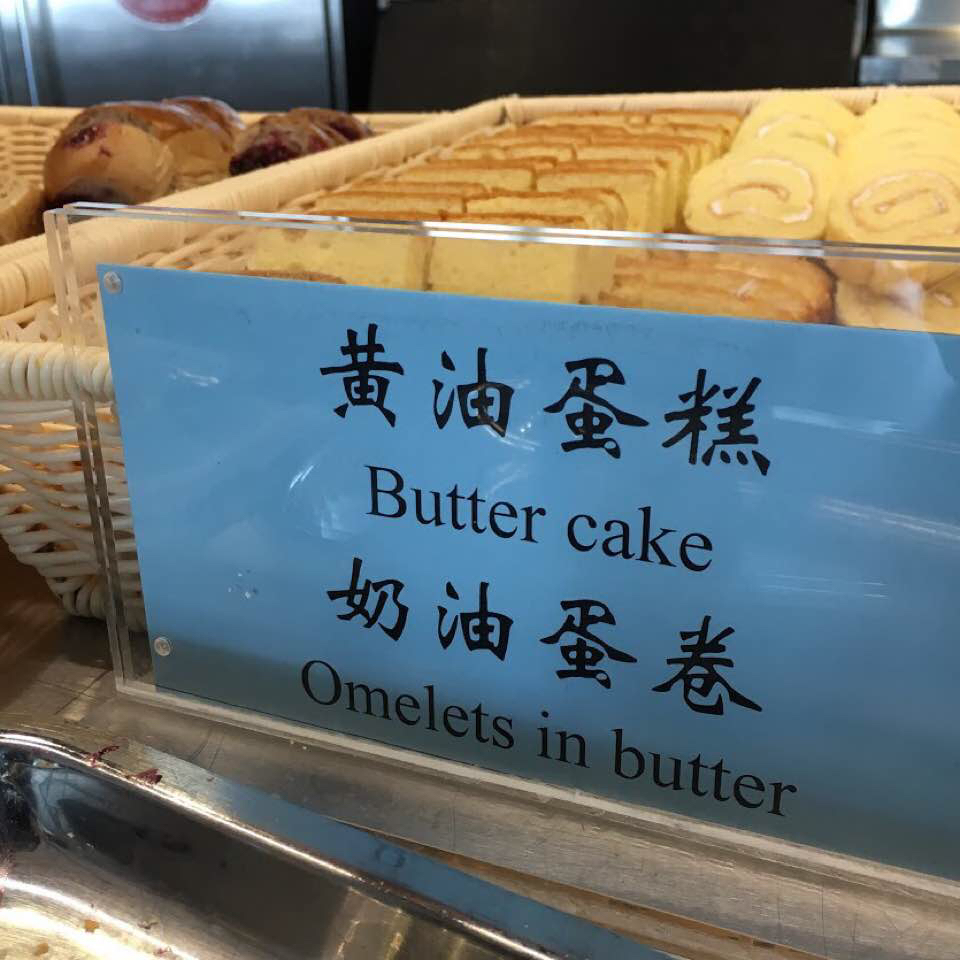 Of course, the bad Engrish trickles down to everyday fashion….. 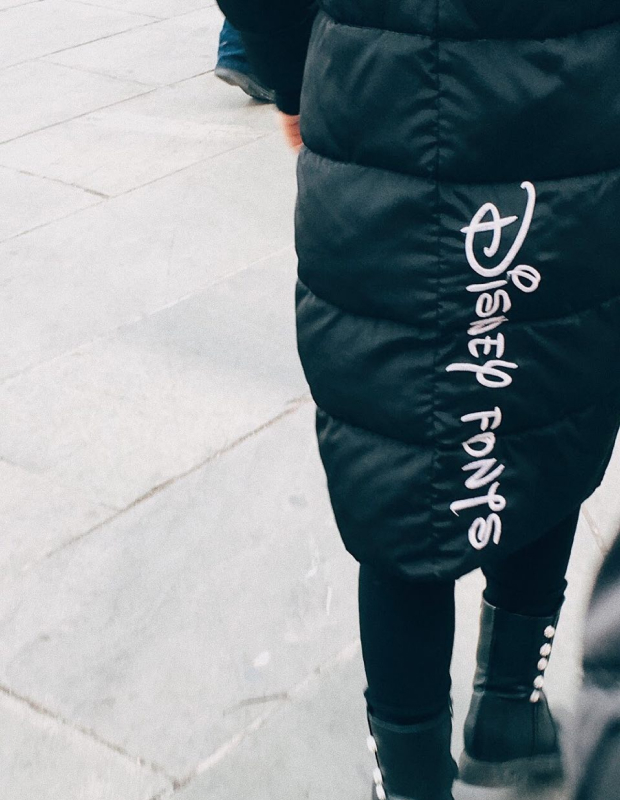 And even the names of their stores and brands: Before moving to China, I’d say my Chinese was barely conversational. Like, I got a C6 in O-Level Chinese pls. I knew how to order food and hold a conversation Singaporean Chinese style. But once thrown in China, I got overwhelmed FAST. Plus, people were speaking in various accents and regional dialects. And they spoke REALLY fast. Like how Singaporeans speak Singlish real fast.

I pride myself on being a fast learner and adaptor, but let’s just say after three years, sometimes i’m still like HUH!??!?! at taxi drivers. That said, living in a predominantly-Chinese area really helped me with the language. There were barely any English-speaking expats there, and my housing area was full of old people.

My neighbourhood one rare snowy day

I lived in what’s known as a Xiao Qu, or “small community” – and there are about 15-20 blocks of flats in each “community”. It’s actually really different from living in an HDB estate in Singapore. These days, “mama” shops are a forgotten sight, but over here, there’s one for “community”. It doesn’t sell much, the essentials mostly. But they have a space for residents to store their bicycles, and will even receive packages on your behalf if you’re not home. And for someone like me who was living by myself, it was nice to have someone recognise me and say hi whenever I popped by. 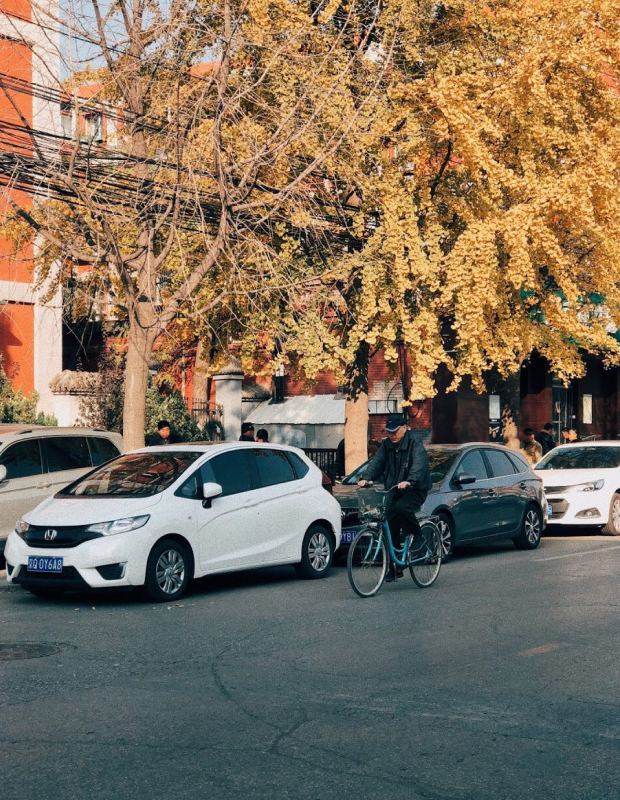 It was great in autumn too

There was also a tailor shop right downstairs my block. I could run there in a minute from my apartment lol. Everytime a Taobao buy didn’t fit right, or if a pair of pants needed fixing, they’d do it for sooooo cheap. Seriously, it cost about SGD1 to fix a hole in my jeans, SGD1.50 to alter the length of my pants, and SGD2 to punch more holes in my belt. Bad Taobao buys???? A THING OF THE PAST FOR ME. My cutie tailor and her husband. Guy who fixed my belt. Should have asked him where he got his shirt from instead.

The downside was that they didn’t fix bag straps. So she had to direct me to a cobbler, who, get this – does not have a fixed store or hours. It really depended on whether you’re lucky or not to “find him by the bus stop”. What the hell. Ok but I can deal. 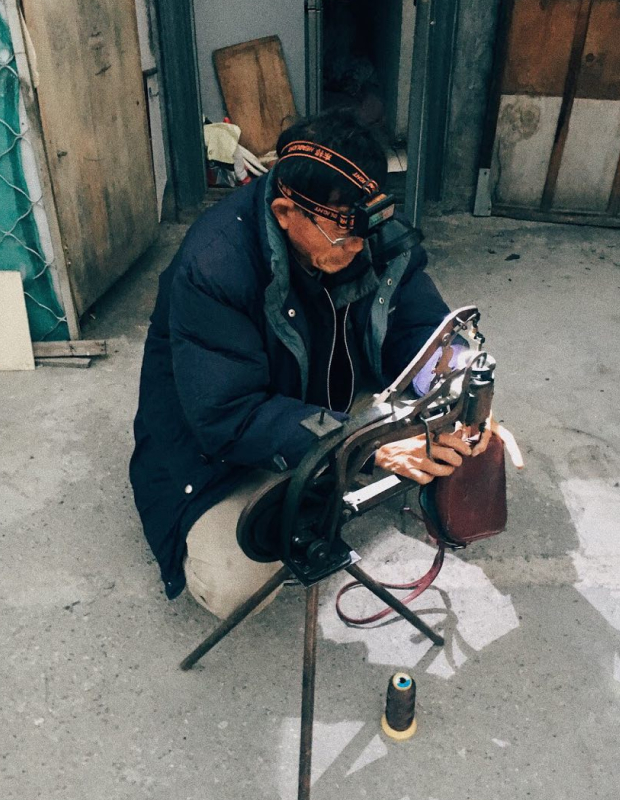 But the downside of these “communities” is that they’re old and poorly upkept. It’s okay if the paint is peeling on the outside. But mass electricity outages were a constant source of headaches for me. I experienced my first mass outage after just four months of living here, in the height of summer lol.

I still remember I was watching a movie on my laptop at about 12am, and EVERYTHING just shut down. It played out very dramatically – the lights slamming shut, the air conditioner releasing its gentle shutdown ding and my brightly-lit laptop blinding me momentarily. I WAS SO BLOODY CONFUSED.

I wondered if we forgot to pay our electricity bills, or if something had tripped. I couldn’t bear to wake my flatmate and his boyfriend up (ok it was also very awkward – it kinda felt like me waking up dad up to solve a problem), so I tried turning on the main switches and resetting it while trying my best not to freak the hell out about my phone which was now on five per cent battery.

Life tip: Have candles and a bloody torchlight in the house for emergencies like these.

Also, can I say this is like the height of fucking summer, so it’s like 35 degree Celsius out there at 12 midnight, and even warmer and stuffier indoors? A very alluring summer but only in pix!

Anyway, I finally realised my stairwell had no lights after 15 minutes of flicking switches and deduced my entire flat must be down. So I put on some respectable pants, headed downstairs, and realised that a group of GRUMPY, SWEATY people had gathered.

Now please remember I was very new to this whole Living In China thing, and I wasn’t sure what was going on – mostly because they were speaking very quickly and in their dialects. There were elderly grandmothers swearing, men smoking by the corner, mums carrying their babies and fanning them in the heat. I WAS OVERWHELMED TO THE MAX.

And of course, the women got shit done. Oh, they most definitely got shit done. After 15 minutes of dawdling and moans of “what’s going on”, someone finally called for information. Then they called a number to call and CHEWED OUT the administrative staff asking if we were going to get an electrician. They said yes, we’d get them here to fix the trip in an hour.

“AN HOUR??????? THERE ARE OLD PEOPLE AND BABIES SUFFERING IN THE HEAT” (lmao dramatic but TRUE) and whaddaya know? Two men came over on the bikes 30 minutes after the call (still a long time but I can’t complain) and we got out electricity back in 15 minutes. But between the shutdown and having lights back on – it was about an hour of sweating and swearing lol. Beijing is pretty much made of chaos. And I remember how alkjdfkadgfucking hot that day was when I took this picture because I could smell all the metal and rubber.

Speaking of summer, it’s essential to mention that while Beijing is generally dry, the city gets deluged between July and August. I’m talking about DAYS of continuous heavy rain. I know Singapore rains a lot, but really, I’ve never seen rain come down this hard for three days in a row. And of course, that meant insane flooding.

The weather forecasts are always pretty accurate. So I know that if I don’t have to work on those days (I work shifts), I can just stay at home. I seriously stock up my food supplies — water, instant noodles, food, snacks, TV shows in case the Internet goes down, etc — and I just hole myself in. Seriously, you do not want to be out if it’s pouring like that.

I had to go to work once at 4pm and I was drenched when I reached the office. When I knocked off after 12am, it took me an HOUR before any cab would take me. I try not to order takeout during heavy downpours because it just feels mean, but I have read about how people would leave notes on the app telling the drivers to take their time, safety first, and even placed orders for hot soup for them. It’s impossible to stay dry without a raincoat when it rains in Beijing. There’s no guarantee your umbrella will protect you from the splash of an irresponsible driver.

My home and workplace were very close to the heart of the city (Tiananmen Square and the Forbidden City), so plumbing is still reasonable. But it still means the puddles still reach above my ankles. If I were in Singapore, it still feels kinda ok to wear sandals on the way to work and then change into work shoes. But if you think about the amount of spit, dog poo, questionable litter and other things that are on the ground in Beijing….. yeah… HELL NO.

One of my favourite / nightmarish moments I’ll never forget was this bout of heavy rain in summer. I got off an early shift and was home by 4pm, and then it started to rain. The winds were wicked strong and I could hear the thin aluminum sheets / roof rattle, then I hear a flower pot crash, the trees really shaking violently. A few moments later, the sound of water gushing got really loud, to the point that I thought a water pipe had burst in my toilet, or just outside my apartment.

You’ll be relieved to know that my house suffered no such pipe mishap. But when I opened my windows to check if any pipe outside was damaged, I was hit in the face by… HAIL.

I took this pic after it stopped hailing and most of it had melted down.

You got that right. It was hailing on a 37 degree Celsius day.

LOL this city makes me so angry sometimes.

HOW RIDICULOUS!!!!!!!! But what’s so fun are also its people that you get to see on a daily basis. Like some art situation going on at a public space near my estate. 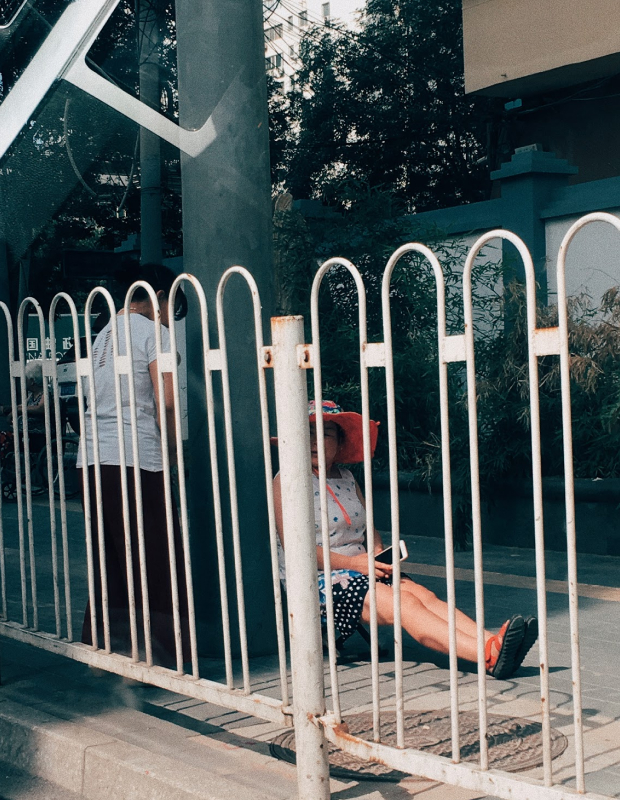 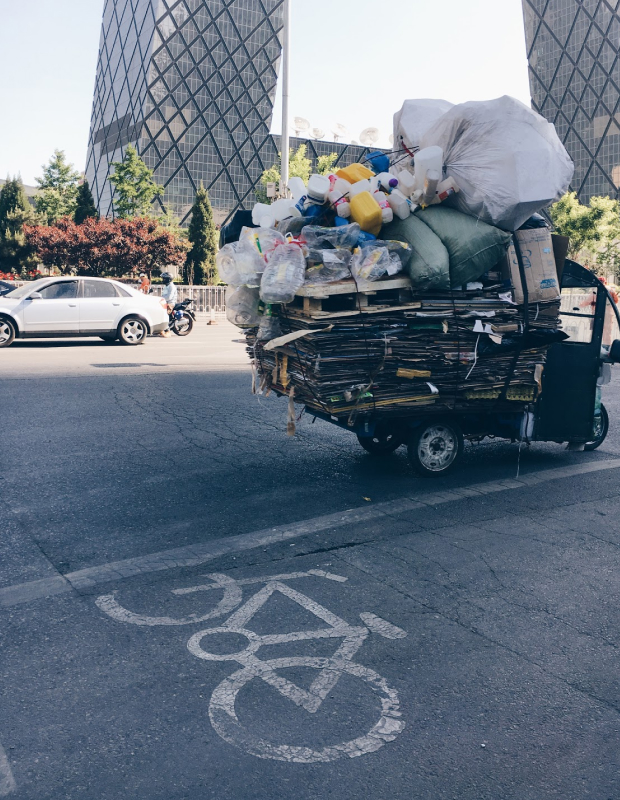 And this baller cart driver loading up his tiny scooter with things that probably weigh more than his scooter. 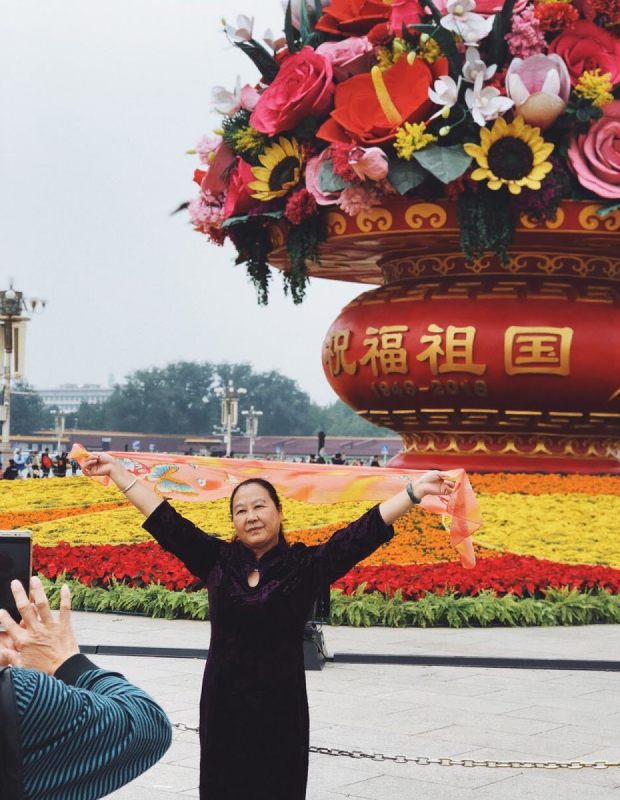 And this aunty super loving her own pose in front of a giant flower exhibit at Tiananmen Square.

To sum things up, Beijing is chaotic, but it is also very beautiful in its everyday ways, and in the most normal of places. It’s lovely to be in an estate that changes its vibe and façade every season, and it’s always fun to live a life vastly, vastly different from the one you’ve had back home. For me at least. It’s hard to believe that I’d be cycling (thank you ofo) and trying to avoid death traps. And it’s so surreal to look back and recall that I’d leave home at 7am for work and could buy a freshly made youtiao for breakfast on the way. And for all the weird complaints and hardships that came my way, I think I wouldn’t have exchanged this experience for anything else in the world – weird menus, stomachaches, air pollution and all. 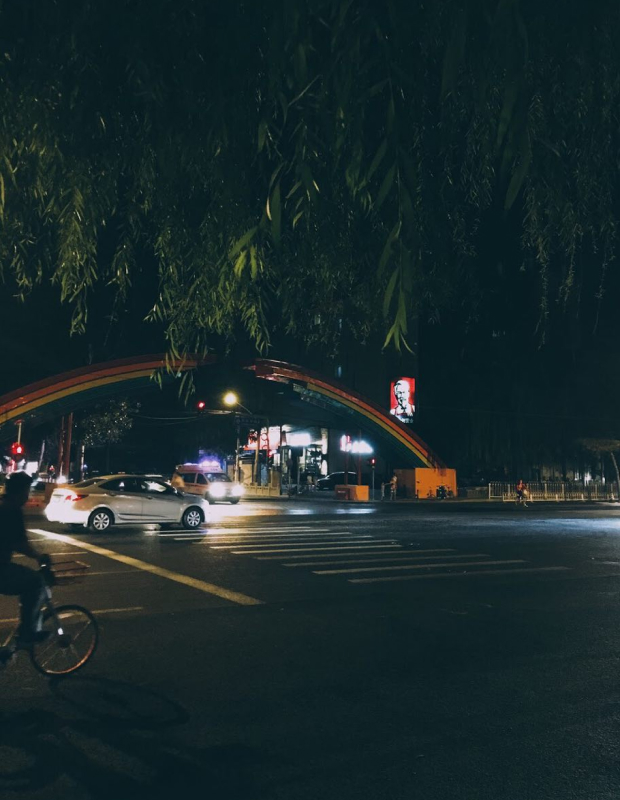 Outside of Singapore and Malaysia? Download the app from your app store.