How I met (and proposed to) my girlfriend

Sam is a café owner, coffee aficionado and fiancée to her crochet-magician partner, Ros. The pair have been together for the last three years, and got engaged after a year together.

This is their story of how they met, fell in love, and their perspective of being a same-sex couple in Singapore. My name is Sam, and two years ago I proposed to my girlfriend, Ros. I had it all planned out: we were on a holiday in San Francisco and intended to meet up with two of her good friends for a hike.

Leading up to the hike, I was super paranoid that she would find the ring in my bag. I’m very messy, so she’s always packing for me, but this time whenever she touched my bag I would cry out, “DON’T TOUCH MY STUFF!” I gave excuses that we were on holiday and she was manhandling my personal things, and she just went, okay whatever. Suspicious much.

Before the hike, I had to wear my leather jacket because it was the only jacket I had with a pocket. She said, you’re going to hike in a leather jacket?! Why don’t you wear your hoodie? To which I said it was cold, let me do me. It didn’t help that her friends were with us, and they didn’t have the best of poker faces; the three of us looked extremely guilt-ridden and couldn’t really help but share panicked glances.

When I first told Ros I liked her, I wrote her a letter. She’s always doing things for other people, putting others ahead of herself, so in my letter I wrote that I hope she eventually does something for herself, and I hoped that dating me would be one of those things. Since then it became a tradition between us, I still write her a letter on the same date every month - we’re now on letter 31.

So for my proposal, I also had with me four handwritten cards. Ros is extremely close to her friends, some of them going back as far as primary school; these friends in turn became important friends to me too. So, I’d asked them to write a short message on how they felt about us as a couple – it was my back up plan in case she needed more convincing! She didn’t need it, but of course I gave her the cards anyway. I popped the question by a small cliff (praying I wouldn’t drop the ring), but I was pretty sure that she would say yes. And she did. I knew really early on in the relationship that she was the one, but I just wasn’t sure about how she felt. I’m four years older than her, and I’m the first girl she’s dated. I didn’t want to freak her out by moving too quickly. But not long before, we’d had a pretty real conversation about our future, and I thought hey, maybe she’s more ready than I thought she was.

A same-sex marriage wouldn’t be legal in Singapore, but to me, I wanted her to know that I’m looking to take our relationship to the next level. In any relationship, there’s a tendency for things to get stagnant.

And I wanted her to know that our relationship isn’t just going to be stuck just because we can’t get married in our country. I wanted to actively work towards something.

We agreed that it’s going to be a long engagement, have everything lined up, get a place of our own, before we go wherever it is to sign the papers. When I first got together with Ros, we had both come out of pretty long term relationships – I was with my ex for almost four years. But Ros and I were close friends for a while, and after, we started dating.

Ros and I met at a fair, where I was selling food at my stall, and she was selling her handmade crafts. She was crocheting these little yarn sushi rolls at her booth, and I happened to look over at her. The sushi was so small so all I could see was the white yarn, but I had no idea what it was. I thought she was untangling her earphones. 30 minutes later, I noticed she was still at it, and thought, wow it’s been awhile, this girl needs help. So I looked closer, and realised she was actually making something. *facepalm. Samples of the sushi crochet pieces that Ros has made.

We would run into each other here and there at events, where we would chat or catch up on Facebook. One day I was in a weird place, and we started talking about life and relationships. We were still at the friends stage, didn’t think of each other *that way* at all, but we realised that we shared a connection of wanting the same things in life. So we started hanging out a lot and spending time with each other, and sending silly snaps on Snapchat. 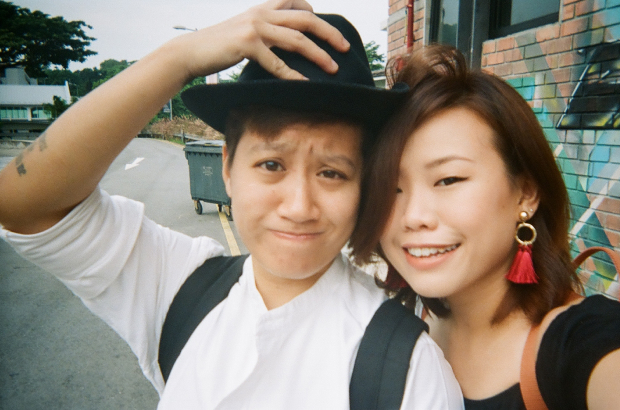 After some time, I finally told her that I had feelings for her. Initially we thought maybe we should spend some time apart, take a moment to think about this. But we were super comfortable with each other, we played a consistent role in each other’s day-to-day lives and we didn’t want that to change. We decided to just see where it goes – there was no need to put a label on things yet, or consciously date. And it just moved on from there.

I knew early on that it was for keeps. I’m full of nonsense, and she has a lot of patience and tolerance for my bullshit. She’s one of the few people who can keep up with what I’m saying. I’ll ramble off and change topics, and she’s just there with me.

It kind of freaks people out, but since we’ve gotten together, we’ve only spent about four days where we don’t see each other for at least 10 minutes a day. People go, omg, why do you spend so much time together, what’s going to happen when you live together? But to me, that’s the point. If I can’t stand seeing her so often now, what more when we do live together?

We’re not clingy – we just really like spending time together. We never say, I don’t really want to see you today.

Even when I’m stressed and need my space, I still want her around. She gets that I need to chill out, but physically she’s around just in case I need her. We’ve kinda absorbed each other into our separate lives; at some point, I taught her to make coffee, and she even taught me to crochet as well! Ros is the first person who made me actively think about getting married. Things aren’t as straightforward for us. I went from thinking about settling down to actually finding out the process of getting married overseas, bookmarking countries where I can get married. Property is another challenge. I’m 31 this year, and if I want a HDB that’s still four years away. But it is what it is.

Honestly, Singapore has come pretty far since my primary school days where just the thought of coming out was the most terrifying thing.

I came out when I was 14. I don’t remember how I came out in school, but I remember it was difficult for my friends to understand. One of my friends even joked that she didn’t want to sit next to me in case she “catches” it. None of us knew what being gay was, or where it came from. Sometimes you grow out of it and sometimes you don’t, but for me I didn’t. I was bullied, and I went through a period of depression. I’m lucky that we didn’t have social media back then and cyberbullying didn’t exist.

Then I went into junior college and things became even harder because I went from a same-sex school to having male classmates. Not everyone was very kind about it, and there were guys who would call me “It”.  By then, I knew not everyone would understand.

In my 20s, there was an incident that I’ve recounted before in an interview for a Pink Dot article. I was using the public washroom, and a little girl ran in and got a shock. She told her mother that there was a boy in the ladies room. Her mother accused me of confusing her daughter, and said things like: “How can you use the toilet openly? What am I going to tell my daughter?” I walked away but she followed me, saying she was going to call security and demanding that I apologise to her child.

I told her that the only thing I’m going to apologise for is that her daughter is going to grow up with this closed minded mentality.

I told her that the only thing I’m going to apologise for is that her daughter is going to grow up with this closed minded mentality.

But other than that, I do think that Singapore has come really far. Of course, we have a long way to go, and it does get frustrating, but I try to remember that it could be a lot worse.

LGBTQIA issues do have more exposure now. People in general have just moved on to bigger concerns in life - like they’ve grown to realise how much bigger the world and life really is, and that a person’s sexuality is such a trivial matter in the grand scheme of things. I’ve actually had people from my secondary school days apologise to me for how I was treated in school. I once caught up with a friend I used to be close with in primary school, and before we parted ways she gave me a card. In it, she apologised for not addressing how I felt in school – it’s not that she didn’t approve, but that she just didn’t know how to approach the subject. She didn’t know how to tell me that it was okay. When people apologise, it makes me feel so much better about life. It’s nice to know that people’s mindset can change.

If people who are going through a tough time were to ask me for advice, I would tell them that it gets better. There’s nothing else to say about it.

When you’re younger, the world seems so much smaller. It feels like a big deal when someone doesn’t want to sit with you, or doesn’t want to be your friend. When I came out as a teenager, I was all out with the baggy boys jeans and trying to make a point. Maybe it rubbed people the wrong way. Maybe not everyone was ready for it. But then I grew up, and things got better. You see things differently.

As for when we’re getting married – the plan is it’ll happen in San Francisco. It’ll just be something small – we don’t mind just quietly signing papers and coming home. It’s more about ticking off that goal together; marrying our soulmate, getting a place, and raising our manja kitten together. Photos provided by Sam and Ros.