Valentine’s Day can be pretty divisive. For some, it’s a commercial celebration that they can do without. For others, it doesn’t matter what the haters say because they love the idea of celebrating love.

In a two-part Valentine’s Day series, one woman reflects on all that she and her husband have weathered through over their several decades of marriage, while another shares how after continuously jumping from one unhealthy relationship to the next, she is finding happiness alone this Valentine’s Day.

Today’s story is about how 61-year-old Christina’s husband Martin gives her flowers every February 14, corresponding to the number of years they have spent together. This year, she will be receiving 37. It might seem like a small gesture to some, but to her, it’s a reminder of how much she is loved.

In her words, she was garang (fierce) when she married him against her father’s wishes but looking back, she has no regrets. They’ve raised three children, supported each other’s careers, and seen their relationship solidify through different life stages.

Every Valentine’s Day, without fail, Martin would give me a bouquet of flowers. It started with one stalk during our first year of marriage and since then, it has increased in number. 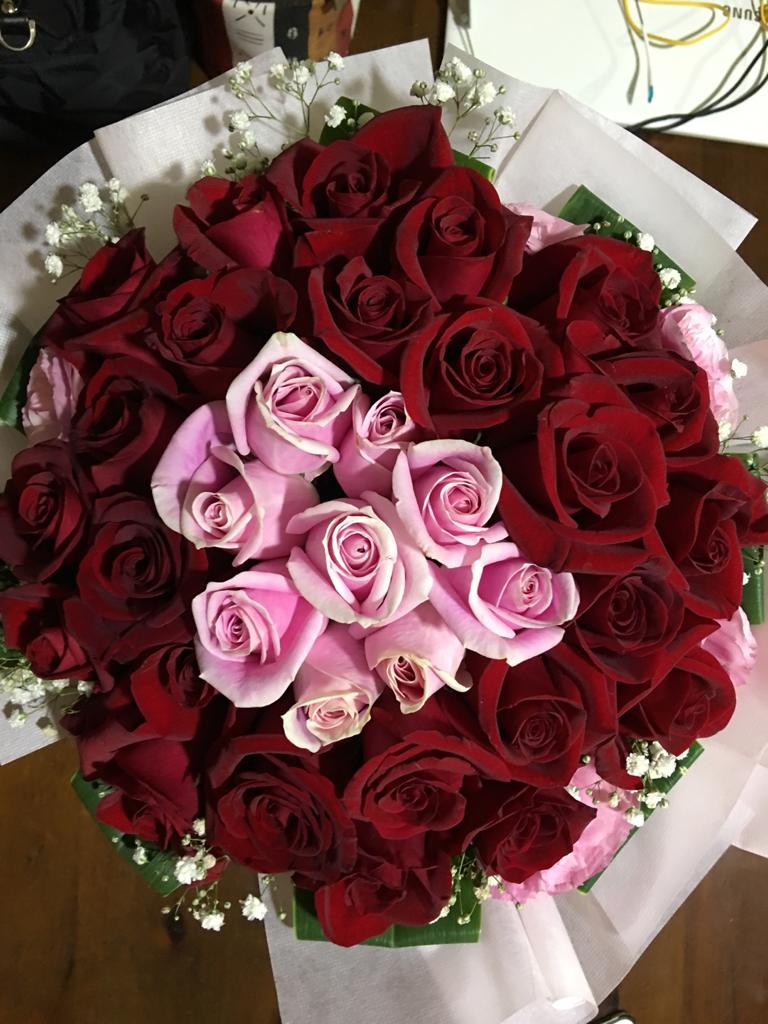 Usually he sends me roses, although he switches things up every now and then. He would meet the florist and discuss what he thinks the arrangement should be. No two bouquets look alike. Beyond the aesthetic, I think the amount of effort that he puts into them says a lot, especially knowing how busy he is with his restaurant business. 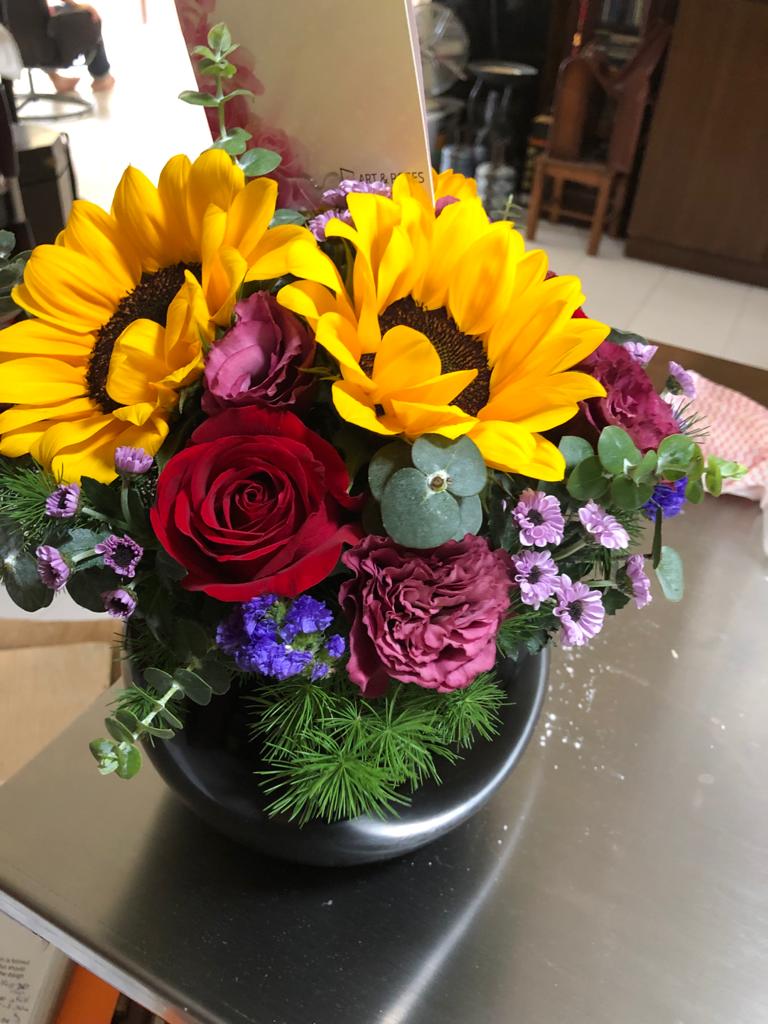 Martin would always excitedly ask what I think of it, and it’s how much he cares that really matters to me. This surprise bouquet really brightened up my day because sunflowers are my favourite!

Due to the nature of his work, we never go out for dinner on Valentine’s Day but I always get a delivery in some shape or form.

There was one year when he went really quiet and I wondered if he forgot, but he said to meet him with our children on Orchard Road. Next thing I knew, he was walking down the busy street carrying a huge bouquet of roses.

I thought it took guts to do something like that! We were not young and our older children were already in their teens. Besides he is not the showman-sort who would typically demonstrate public declarations of love so when he does certain things, you know that he means it.

Another year, he strayed from “tradition” and bought me a baguette sandwich. It was no less meaningful because it was my favourite — filled with brie cheese and ham. 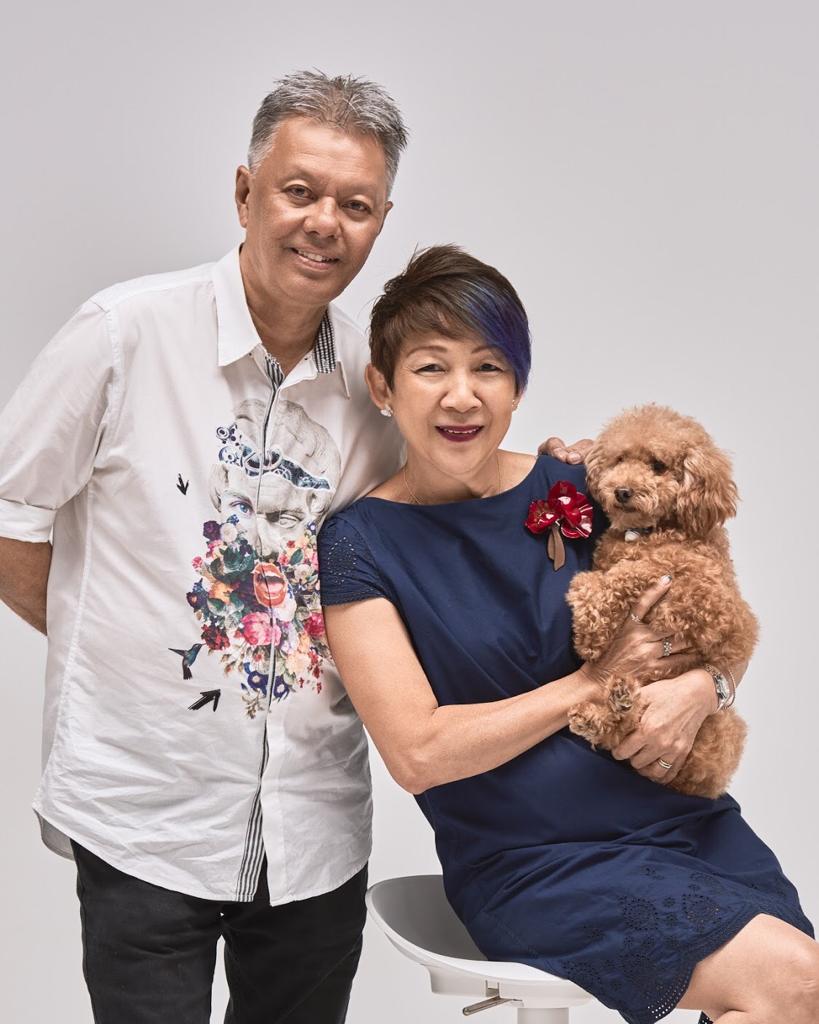 Martin and I with our recently adopted furkid Jonah. (Photo credit: Willy Foo)

If you want to talk about romance, you could say my husband puts in more effort than I do. When his wedding ring couldn’t fit anymore, it was his idea to make a new set so that he could continue to wear one, and he organised for us to renew our vows in church. Leading up to our 30th anniversary, it was him who decided that we should celebrate the occasion, and he took the trouble to make restaurant reservations and gather family and friends.

Whenever I receive the flowers on Valentine’s Day, I count how many there are and they remind me of all that we have been through together.

Martin and I first met through friends when we were 15. I was involved in a church group and he was the altar boy. Growing up, my parents were very strict and adamant that nothing was to distract me from my studies. He would come by my home to chat but we never went out on our own. 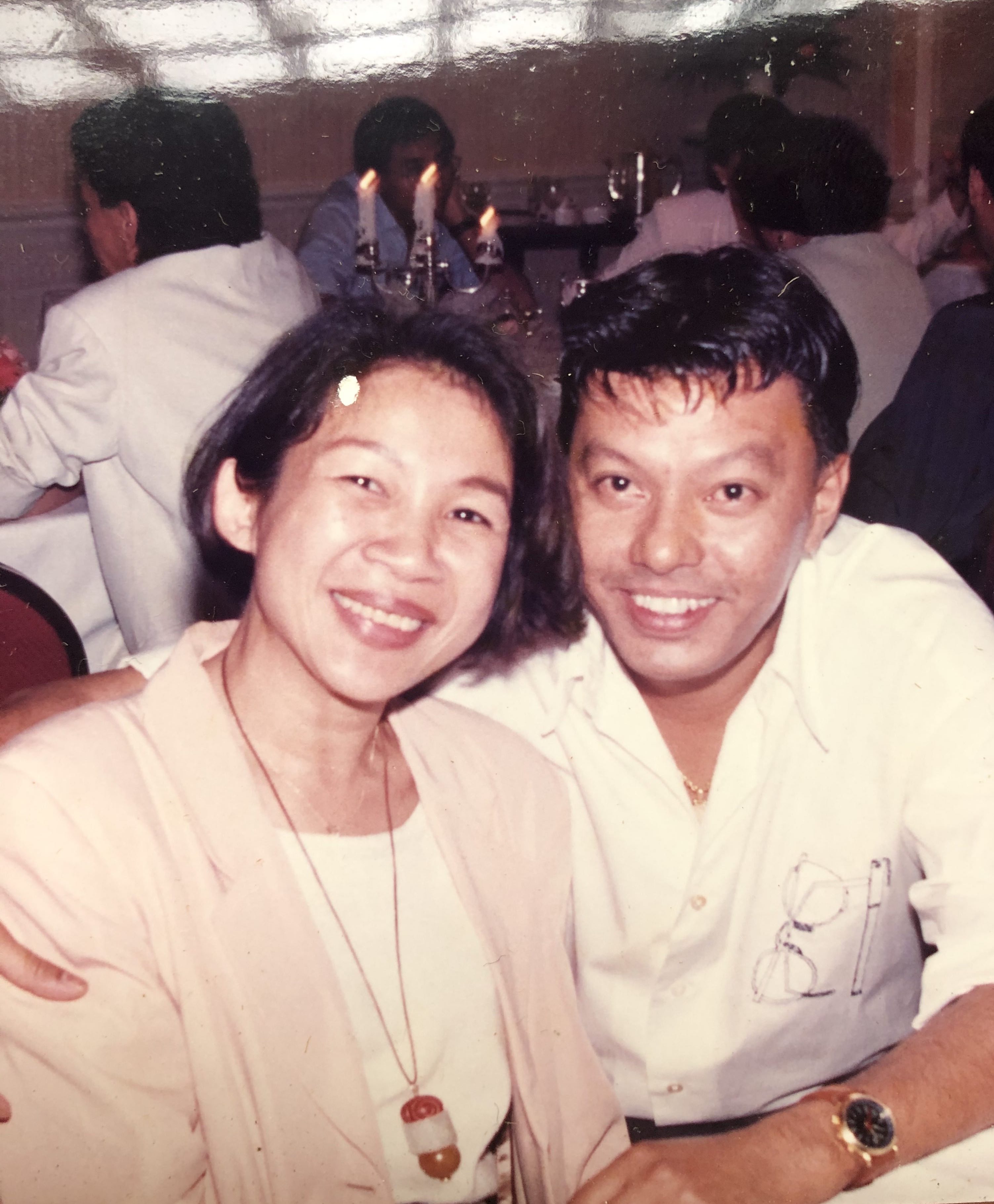 We drifted apart for a few years and later reconnected when we were 20 and I was studying in university.

He told me pretty early on that he thought I was the one, but it was not an easy time as I’m Chinese and he is Eurasian. Interracial marriage was not widely accepted back then and what bothered them even more was Martin not being a university graduate.

I am quite a headstrong person and do not get easily swayed. Maybe it was also on the basis of religion, but I believe we all have an innate intuition in us and I strongly believed that he was the one for me.

I told my parents that there is no guarantee that my marriage will work out but at least it is my decision and if the marriage fails, it will be on me. 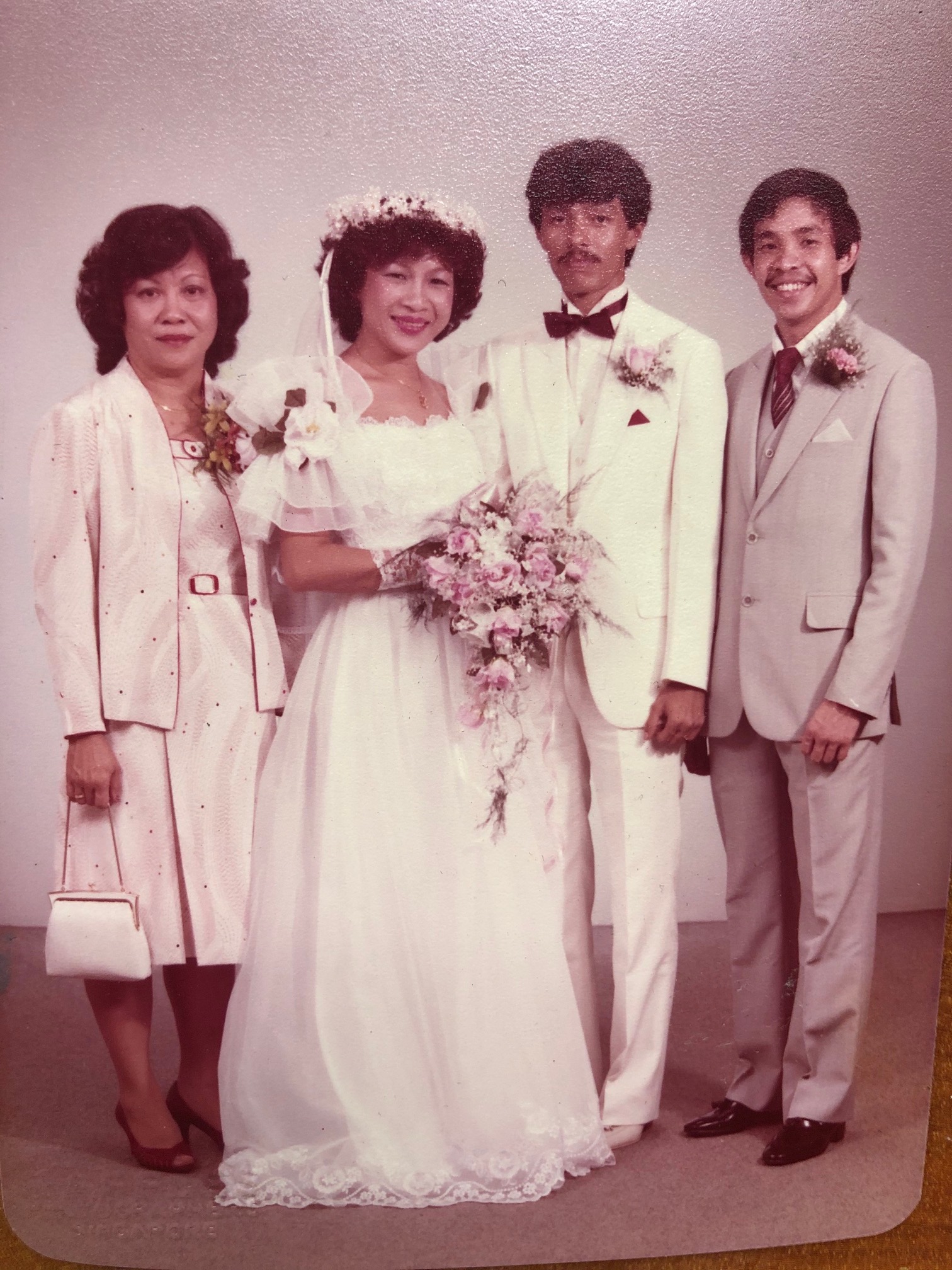 We got married when we were 24.

My mother came to terms with it before we tied the knot but my dad refused to give me away.

I didn’t speak with my father for years. Only after I gave birth to my second child did my father soften and acknowledge my marriage.

It was not easy because even though I made the first phone call to reconnect, my father was very bullish and his first words were “Is this important?” Only after a long period of silence did he finally invite me and the children over to see him.

Thankfully, Martin is not at all the vindictive sort so when my father finally agreed to meet him as my husband, he treated my father as if there had never been any animosity between them. He made sure that my father had an abundant supply of his favourite wine and steak. Martin really is such a good husband and father, and I was really glad that my father finally saw that. The victory moment was when he told my uncles and aunts how lucky he is to have a son-in-law as giving as my husband.

When my mum moved in with us, I argued with her sometimes and he would be the one dragging me away, reminding me to calm down and to be softer with her. 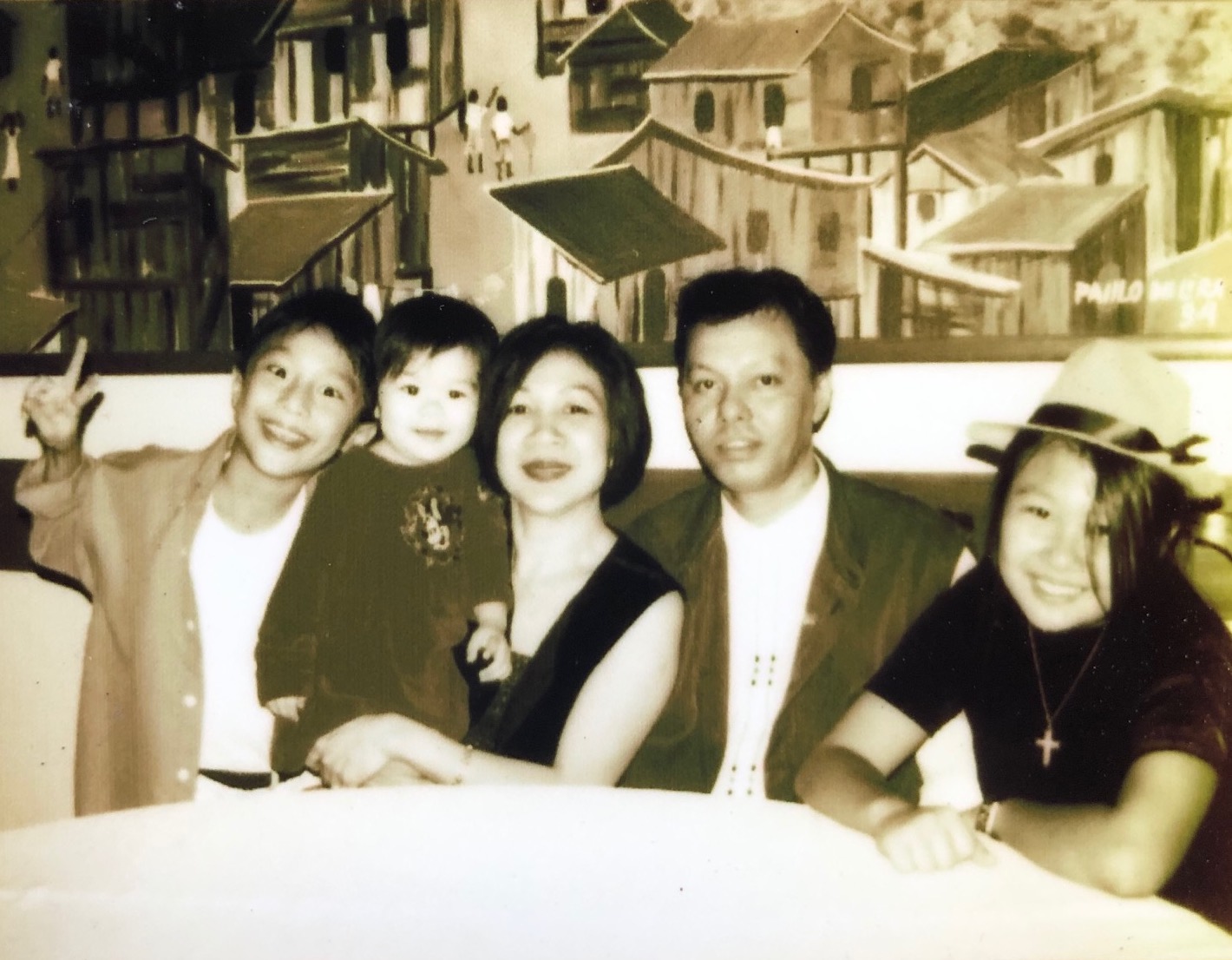 He is a person of very few words, but to him, it’s always family first and that is one of the things that I love about him. We always try to involve our children in our celebrations because they are a manifestation of our love. We still hold hands in public and never shy away from texting “I love you” in the family group chat. When our anniversary date approaches, he would remind our children to do something. It could be as simple as making the time to have a meal together. (Photo credit: Willy Foo)

Even though our children have grown up  — our eldest daughter is married, our son is engaged, and our youngest daughter is completing her university education, he gets really excited about sharing things with the family. It could be Tomahawk steaks for a barbecue or giving cooking instructions without doing any cooking himself!

As much as I appreciate how he gives me flowers on February 14 every year, if he chooses to stop one day, I’ll be able to look beyond that. To me, it’s more important to show love through everyday gestures.

Honestly, I don’t do anything for him on Valentine’s Day. When I was younger, I would buy anniversary gifts but when you are older, you feel like you have everything that you really need. Instead, I would do little things with great love throughout the year. It could be helping him refresh concepts for catering events or helping him run errands so that he and his staff do not need to go out of their way.

When it comes down to it, what matters is having a supportive spouse and someone who inspires you to become a better person. We recognise each other’s talents and do not feel threatened by who is growing faster, earning more or having higher qualifications.

Martin might not have graduated from university but that has never been an issue for us. From the start, we never inhibited one another and saw each other as equals. Martin might have been traditional in how he wanted me to take on his last name, but we always made sure to be on the same page when raising our children and he never held me back from developing my career, even though work trips took me out of the country half the time.

You mature differently and are never the same people as when you first fell in love, so there are definitely periods when the relationship is tested. There were times when our busy work schedules meant not being able to see each other for days, which is why travelling together every year as a family became an important opportunity to connect away from the daily grind. Even if we didn’t see each other, we would keep each other updated on our whereabouts in the family group chat.

In 2017, we made a family trip to Sri Lanka and our children brought their partners along too!

There were moments when my in-laws needed emotional support or help to tide them over a tight monetary period, and we occasionally disagreed over how to handle these family situations. I was very forward and didn’t defer everything to him. There were emotionally charged moments when I said things that I didn’t mean but Martin always remained steadfast. Ultimately, what saw us through the rough periods was our same sense of values, bearing in mind what we love about one another, and always trusting each other to arrive at a solution without compromising on our children’s welfare.

For all his rough edges, at heart, my husband takes care of me and places my happiness up top in the grand scheme of things. He used to be terrified of dogs but I’ve always loved them and since getting married, our family has had four dogs. He can be very unbending in some ways but when it comes to my happiness and that of our family, he is willing to put aside his fears. 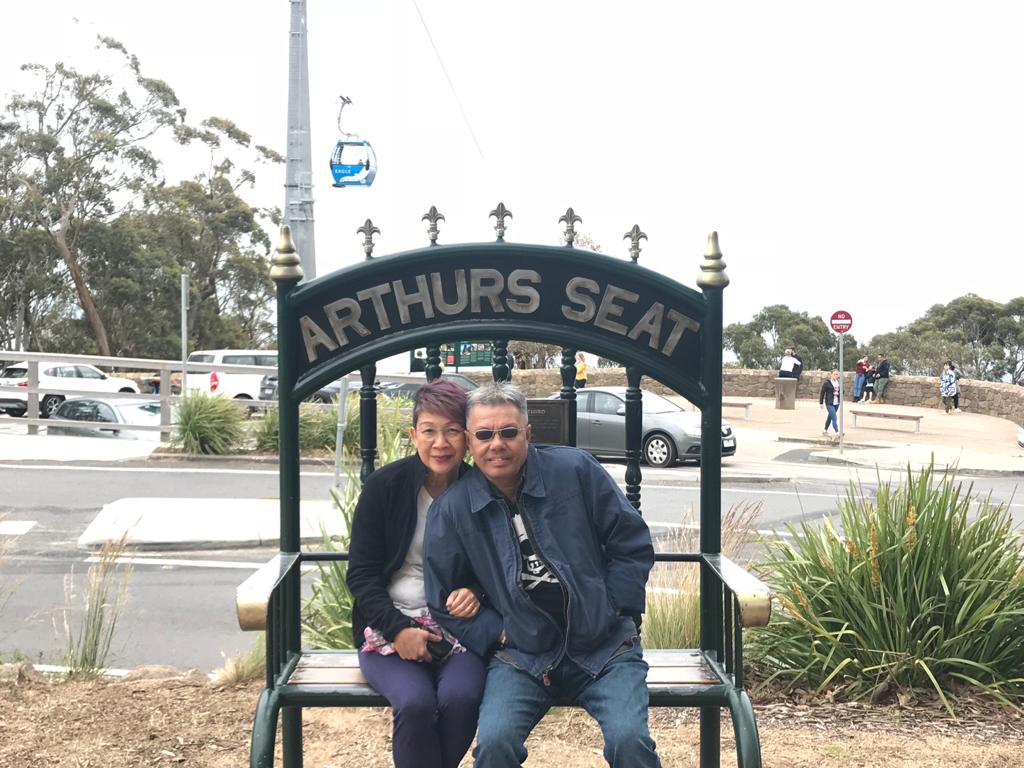 Every now and then, he still asks me how he looks. Does his watch match his jeans? Should he tuck in his shirt? Dressing up and grooming yourself is a very intimate act and it makes me feel happy to know that even after all these years, he still values my opinion. On our eldest daughter’s wedding day, we welcomed a new son-in-law into the family.

For 37 years, we have witnessed births and deaths and everything else in between. These experiences have solidified our bond. When our children were younger, parenting took the front seat but now that they have grown up, it is time for us to enjoy a different level of relationship. I recently retired from my job and we have more time to spend together, watching Netflix and travelling. We have been welcoming new family members into the fold too so our current priority is ensuring that our son-in-law and future daughter-in-law know that they are a part of our family. We want to continue being united and support them.

I think my children are open and expressive in their love language because they are used to seeing my husband and I expressing our love openly in front of them. We remind and encourage our daughters and son to take their time to develop their relationships and to see beyond race or religion. More importantly, a life partner should be someone who treats you as an equal, and always helps you become a better person. Martin and I are not perfect people but we are aligned in how we value each other and work hard at setting a good example for our family.