Losing the love of my life

Most people know of Emily Kong, 29, as the Malaysian actress and singer. Her death was a tragic shock. We were deeply moved by the tributes after her car accident.

This post is in memory of her from Wong Weijing, her widowed husband.

I remember on the day of the accident, I got a shock when I woke up around 7am and didn’t see Emily sleeping by my side.

I noticed her luggage lying on the floor - still half packed. My mind ran through the different possibilities of where she might be.

The last we spoke on the phone was at 3.22am, when she said she was about to reach the nearby traffic light. Realising that she should’ve been home, I began to panic.

I returned a missed call from her sister and brother-in-law and was told to go over. Many thoughts ran through my mind but “death” wasn’t one of them.

When I arrived at their home, I asked if she’d spent the night there. Instead, they said she was no longer around.

Their words sunk in. I felt frantic, I cried, and I shouted. Since I was a child, I’ve never been one to cry. But the tears couldn’t stop flowing as I made my way to the forensic centre. I have never felt as helpless as I did that morning.

The day she passed away, I kept asking God, “Why did this happen to me?” I needed to know somehow that she’s in a better place.

At first, I agreed to have the body sent back into the operation room for cleanup, but within a few minutes I realised that I still wanted to see the body. The door was locked so I punched it until the attendants opened the door. My hands bled and my friends had to pull me back. I was going out of my mind, and I kept trying to hurt myself and behaving irrationally.

It has been a month since she died but there are still mornings when I wake up having to remind myself that she’s never coming back. I’d find it hard to breathe and there would be an inexplicable pain in my heart as my mind grapples with the truth.

Everything reminds me of her. From my morning routine to the places we’d frequent together. The memories keep flooding back.

She’s been a constant in my life for 16 years. Over the years together, I gradually took on a more protector-type of role towards her. In a way, I changed the way I expressed my love for her. I hardly ever shared my feelings or said “I miss you” the way couples would during the early stages of a relationship. Instead we’d tease and make fun of each other.

Emily and I studied in classrooms right next to each other in primary school. I was 12, she was 11. 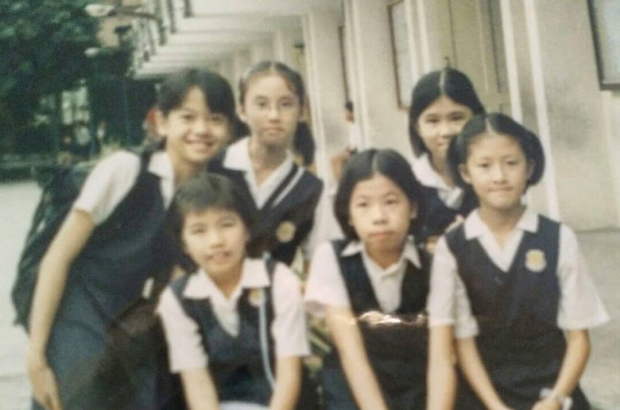 Emily’s the one wearing glasses, second from the left and standing in the back.

Seriously, when I walked past her in the hallway back then, not once did I imagine that one day I’d be marrying this girl with the bookworm glasses. Neither did she think that she’d wind up with me. She referred to me as the fei zai (fatty) from the next class. We went to different high schools but reconnected on MSN and ICQ when I was 14. Often, I would send her a speedy BRB message and disappear for a bit to play an online game. She grew curious as to what I was doing while I was away. It turned out that she played the same online game too. That surprised me - she struck me as the nerdy sort who would rather be studying than waste her time on playing games. It wasn’t common for girls to play online games either.

When I was 16, I transferred schools. That brought us closer because my new school was near hers. We hung out in-person. Then, we started dating. Playing online games and watching anime, we had a lot in common. I loved how natural she was and that made her special to me.

I always anticipated taking the bus home from school. I’d sit by the window so that when it passed through her school, I’d be able to wave at her. She’d be standing there carrying a pink backpack, waving back. Caught up with school and extracurricular activities, we hardly spent time together back then so she gave me a bolster to keep me company every night. Till today, I still have it on my bed. Emily loved taking photographs. “Walau, haven’t we taken enough yet?” I’d say. But she would be relentless and while I was protesting, she’d snap the most unflattering photos of me. In time, I too learned to capture her candid moments and poke fun at her. We got married in 2015 and moved in together in Kuala Lumpur. She would travel every now and then to Taiwan or Macau for performances, but even when apart, I’d text her often. It could be anything, even the mundane things like what I was eating or how I was exercising before going to work. I would take a picture of every bit of my life to send to her.

Emily was always so clumsy, tripping over things and falling down on the street. I can see that heaven is a great place for her, where she can fly and not trip anymore.

It has been a month since the accident and what helps me get by is my faith in God. I’m learning to be at peace with her passing now that I’ve received “confirmation” that she is in heaven. By “confirmation”, I mean that friends and strangers have shared this one same dream, in which she appears.

I wasn’t always religious. I used to get so annoyed at her faith and it was something that we couldn’t agree on. I knew that she loved me but there were times when I felt that Christianity was more important to her than I am. I just didn’t get it at the time.

I was brought up in a family where I had to fight for what I wanted. I had to put in the effort - do this in order to get that. I always topped the class and excelled at sports. All this built my confidence and made me think that I didn’t need a God whom might not even exist. Emily and I would argue over our different opinions, but she never gave up asking me to go to church.

We had been dating for two years when her family found out about us. Her mother was very angry that she was seeing someone who didn’t attend church and forbade her from contacting me. We didn’t speak to each other for half a year.

During our break, a good friend’s dad passed away so I accompanied him to a church camp. I figured I’d learn more about Christianity and see what’s so good about it and if it was worth believing in. I’m a very rational person, so I wasn’t one to readily believe in religion and superstition. When asked to pray, I said - if Emily and I could patch things up, I’d believe in Him. At the end of the camp, Emily texted to ask how it went.

I started attending church with her. Honestly, at the back of my mind, I remained skeptical and wanted to find evidence that God isn’t real, but after six months, my perspective changed. You could say my passion and pursuit of God surpassed my wife’s after that. I started to attend church regularly and even went on to became a worship leader. Whenever I’m feeling down, I talk to God and ask how I can handle this and move on.

I know that she’s in a better place. I just can’t help but miss her. The day she left, I felt as if I had so much to say to her, but I couldn’t anymore. The first two weeks after the accident were especially difficult. I was really suffering. A friend shared that she overcame a traumatic event by writing down her feelings in a book. So one morning, I decided to post a picture on Instagram with a caption expressing how I felt. As soon as the first post went up, I felt a sense of relief. Since then, I do it every time I feel really bad.

Sometimes I include bible verses in the captions. It’s what Emily would’ve wanted - for me to be really firm in my belief in God and to show the world that God is real and worth pursuing.

Social media has helped me express myself and I’m thankful that others have reached out saying that in sharing what I’m going through, I’ve helped them cope with their own grief and loss as well. I’ve always been open about our relationship on social media, even though Emily once told me that I had to keep it on the down-low. In her work contract, there was a clause that stated she can’t openly say that she’s married. That’s why she never posted about me on her public profile, but she did have a private one on which she’d post pictures of us.

When Emily first brought up the thought of entering show business, I didn’t think it’d be a good idea. I held a bad impression of the industry but I came around when I saw how serious she was. Emily’s usually a hesitant person whenever it came to making decisions, even decisions like what movie to watch or what food to eat. But she told me that she received a vision from God and for once, she was so sure of that entering showbiz was she wanted. Since her passing, close friends and church members have been pillars of support so I don’t feel as alone. I’m sad but I know that she’s at peace and deep down I understand that it’s me who has to move on.

She was a brave girl with a great faith in God. I believe that she’s happier than any one of us now that she’s in paradise.

If I could say one last thing to her, it’d be that I’m so proud of her for having dared to pursue what she believed in.

I miss her. But I know we’ll meet again one day.