This story is a continuation of Ramona’s experience in moving abroad, starting a new business, and now, starting a family.

Part one can be read here.

So all of a sudden I’m propelled into Step 5 of life plan. Fair enough because when I first made Life Plan (wasn’t really a conscious decision, just one too many Channel 8 dramas which I HAD to watch because my cousin was acting in them), I was about 16 and had planned to have my first kid at 26.

But NOTHING can describe that feeling when I first saw the results of my pregnancy test kit and G said “WE ARE PREGNANT!” and I laughed at him for saying WE. BEHOLD. THE MAGIC OF MY PEE.

MY PEE CREATED THAT + SIGN. Which means I HAVE A TINY HUMAN GROWING INSIDE ME. EXCITES. 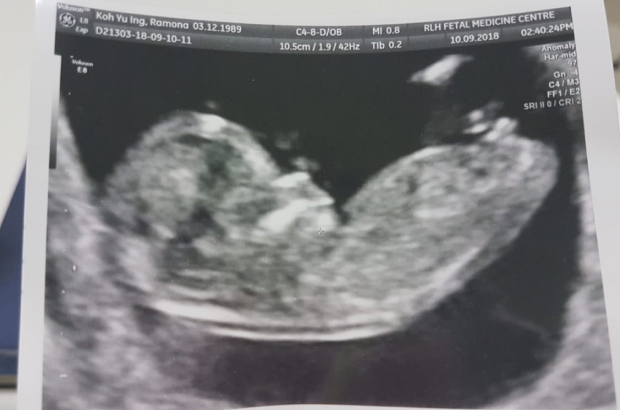 And after the initial joy, it was time for the hormones to rear its ugly big head. The first trimester was TOUGH. I read about how difficult it would be and how emotional women got and I thought “HA THAT AIN’T GONNA BE ME”.

THAT WAS TOTALLY ME. Emotional AND exhausted. The husband could say something as innocent as “we are really lucky, aren’t we” and that would set me off.

HOW LUCKY ARE WE? I AM PREGNANT AND MY FAMILY AND FRIENDS AREN’T HERE. ALL I WANT IS CHICKEN RICE. OR PRAWN MEE. OR BAK CHOR MEE. WHY CAN’T YOU GET THAT FOR ME. OH IT’S BECAUSE YOU DON’T LOVE ME.

He would come back for lunch almost every day to check on me and rush home as early as he could so that I wouldn’t be home alone, but something in me just resented everything he did and all I wanted to do was sit on the floor and hug my jar of Nutella and WILT.

Anyway I was still giving tours then and it was OUR company and I couldn’t just leave it all and go back to Singapore.

So we flew my mum over instead.

Mum got here towards the end of the first trimester though so I couldn’t really tell if her being around helped or it was just the hormones dying down.

Word of advice to women who are pregnant overseas with working husband: FLY MUMMY OVER ASAP.

Mums are the best (when you are pregnant at least). They cook, they clean, they are sympathetic and they tell you off when you aren’t being fair to your husband.

But in the three weeks after mum left and before my family trip, G ordered the cot, the changing table, the buggy (I’d mentioned to him I wanted a jogger buggy and didn’t expect him to remember but he got one), the Moses basket and pretty much most of what we needed for Peanut (← that’s what we ended up calling baby because we didn’t know her gender at the start and she was about the size of a peanut).

Okay so this extremely English-stiff-upper-lip husband of mine shows his excitement in different ways. To be fair, it IS a more practical and useful way for him to show his excitement rather than with empty “oh I’m so excited” words and not bother to prepare for baby.

Three weeks later I flew out to my sister in Munich for a family trip (Mum, Dad, Sis and Me and occasionally the Brother-in-Law joined us).

As G reminded me, it will probably be the last trip we do with just the four of us without grandkids running around. SOBS. Dad wanting to compare his food baby with my baby. I don’t even remember what it felt like being that small.

And then after the family trip, I kidnapped mum to London and didn’t let her leave until New Year’s Eve 2018.

Again, kudos to the husband for giving me (too much) money and asking mum and I to go and pick more clothes and toys for Peanut and not to return home until we had spent it all.

Is it terrible that material things like this makes me feel emotionally assured that G loves Peanut. :( #dontjudgeme

And then he went on to buy more for baby himself because he said we didn’t get enough.

IS THIS NORMAL? This isn’t even all of it! And of course it DID happen again in the third trimester when I went for an antenatal class which I INSISTED G did not need to come along for.

And then I went there and realised almost everyone’s partners turned up and I sulked for the next six hours through the class. And of course, I didn’t care that I had told G NOT to come (despite him insisting he needed to) because we had signed up for another more intensive course.

I went home and complained that he wasn’t excited because this isn’t his first (I have two step-kiddies) blah blah blah and cried.

And he waited for me to calm down, and said YES he has been through it before and knows exactly what to expect and it’s not going to be rainbows and fun and baby’s poop do not smell like marshmallows and chocolates. BUT he looks forward to all the gross things he is going to have to do. And was basically a lot more charismatic than I will ever be.

So life is pretty good now. I feel emotionally secure, baby’s area is all set up in the room, the stretch marks have yet to appear (bopi bopi please don’t ever appear), and it’s seven more weeks to go. GOODBYE LIFE PLAN. WHATEVER. You don’t matter anymore because I have a tiny human about to form a very happy supportive family, and any preconceived notions of Succeeding at Life doesn’t really matter now.

No one (even you PAP, sorry) should be able to tell us what is the “right” way to lead our lives. I’m happy, my family is happy, everyone is healthy, we pay our taxes and we do right by the people around us. No BTO, no problem.

Also, being pregnant has made me truly appreciate Google. A few examples of what I’ve been Googling.

And you know what? GOOGLE DOESN’T JUDGE.

Regarding the first question by the way, it’s perfectly common. It isn’t bits of your nipple, its dried colostrum. After I completely freaked my sister out (I actually called her into my room and saved a really huge piece that was about to fall off and went “BEHOLD. IT DOES NOT HURT” and scratched a huge brown piece of nippie off in front of her #TMI), we decided to confront mum with THE ISSUE and mum said “oh yes it happened to me too when I was pregnant.”

AND YOU DIDN’T THINK OF INFORMING YOUR YOUNG INEXPERIENCED DAUGHTER THAT BITS OF NIPPIES FALL OFF DURING PREGNANCY?

And then mum said...She worried for weeks when she first noticed it, but then nothing else happened and so she concluded it wasn’t a sign of anything bad.

My gosh. How did women ever cope before the Internet. Poor mum.

So I’ve got Google, I’ve got the Husband’s LURVE, I’ve still got both my nippies (thank god they don’t entirely fall out), the family is flying over in two months for baby’s arrival. Life is good at 33 weeks. Plus I can still see my toes! And they look like bunny ears!